There are two nice clear graphs in the latest statistics concerning the characteristics of children in need in England for the period end of March 2014 to end of March 2015. Both show unremitting increases in child protection work.

During the same period there were just over 71,000 initial child protection conferences, nearly a 10% increase on the previous year. 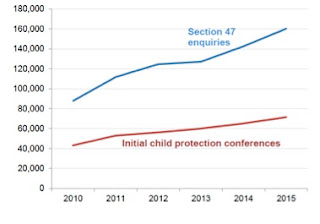 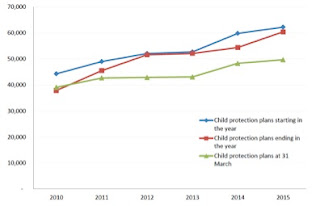 What is most alarming, however, is the relentless increase in work since these statistics were first published. In the five year period:

What the statistics do not show is what resources are going into dealing with all this increased work. I expect that the Government don’t want to tell us about that, but I think they ought to. Have resources in real terms gone up by 30%-40% since 2010? I doubt it.
Posted by Chris Mills ... at 12:40

"... the activity which is undertaken to protect specific children who are suffering or are at risk of suffering significant harm" (Working Together 2006)

You can email this blog at the following address:

Chris Mills ...
Now retired Chris has worked as a child protection manager, a social work academic and as a policy adviser in child protection for a leading UK charity. He has also headed-up a small research unit and managed IT implementations. He holds an MBA degree and has been involved in business education, being for several years an associate fellow of one of the UK's leading business schools and a part-time lecturer and tutor in operations management, project management and information management at various universities. The Chris Mills Child Protection Blog began in July 2009.

You can email this blog at the following address: